We will not have a discussion today, you do not need to email questions. This material will be a bit more dense and technical, and I will lecture for the full period. However, doing the reading will also be very helpful, even though you will not be graded on it in any way. 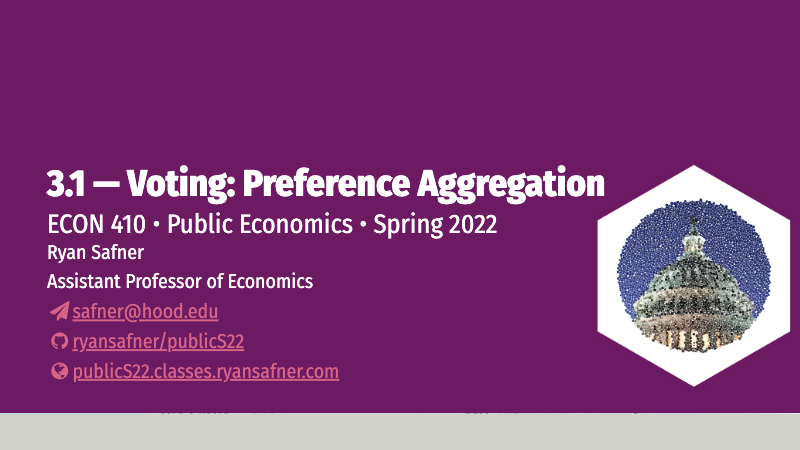 In class, we looked at spatial competition along a single dimension, and saw that if preferences are single-peaked, the median platform will win a majority, and escape the problem of cycling.

Suppose we have three voters again voting on a platform of two issues: (1) Education Spending and (2) Defense Spending. 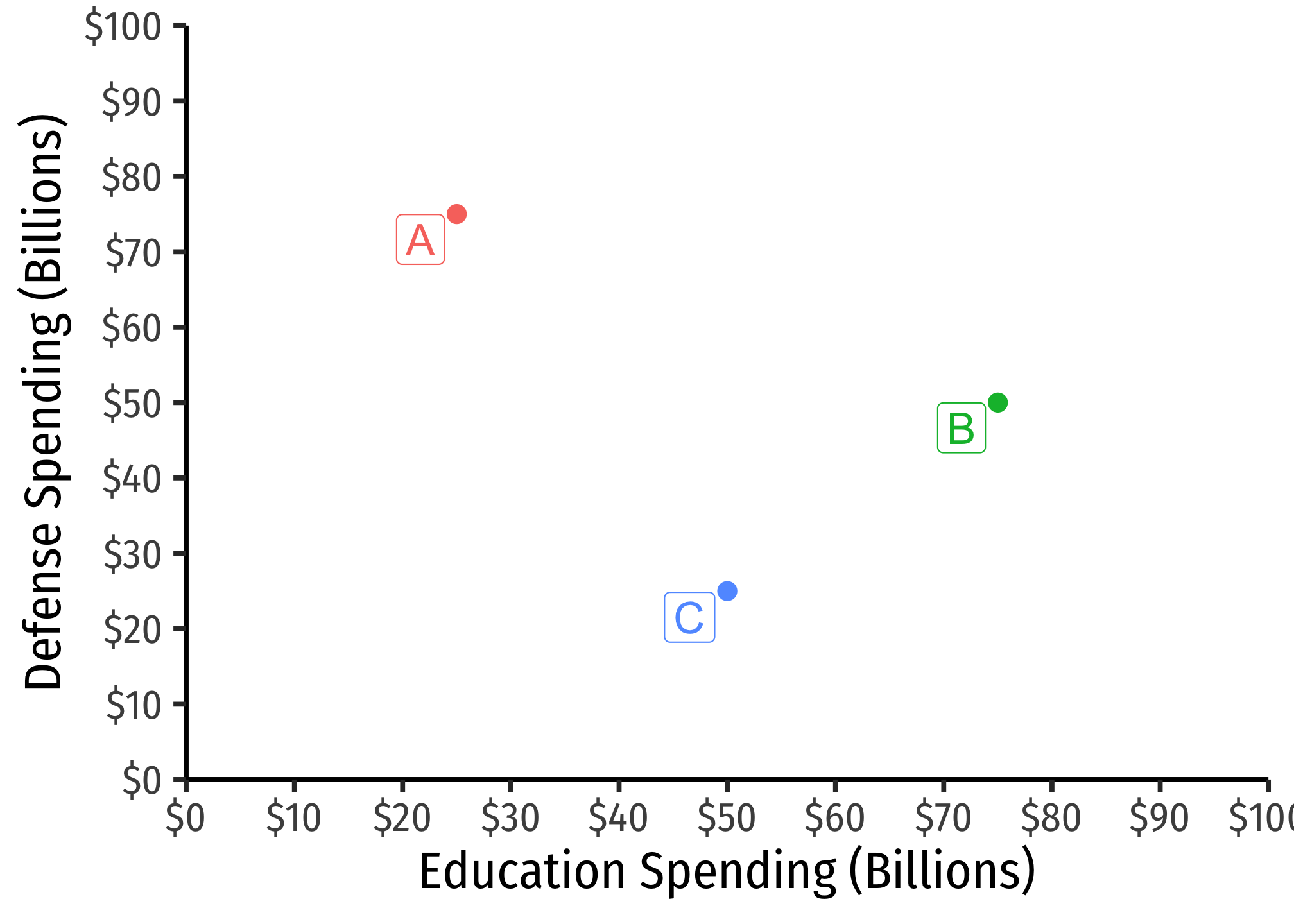 We represent their ideal points in 2-dimensional issue space in the figure above. Imagine this is looking down on the peaks of three mountains, as moving in any direction away from a voter’s ideal point (peak) decreases their utility (if you like, decreases in elevation from the peak).

Inside each circle is the set of platforms that are preferred over the median (and equivalent platforms, the circumference of the circle). As an obvious demonstration, each voter prefers their own ideal point (A prefers A, B prefers B, and C prefers C) over the median platform. 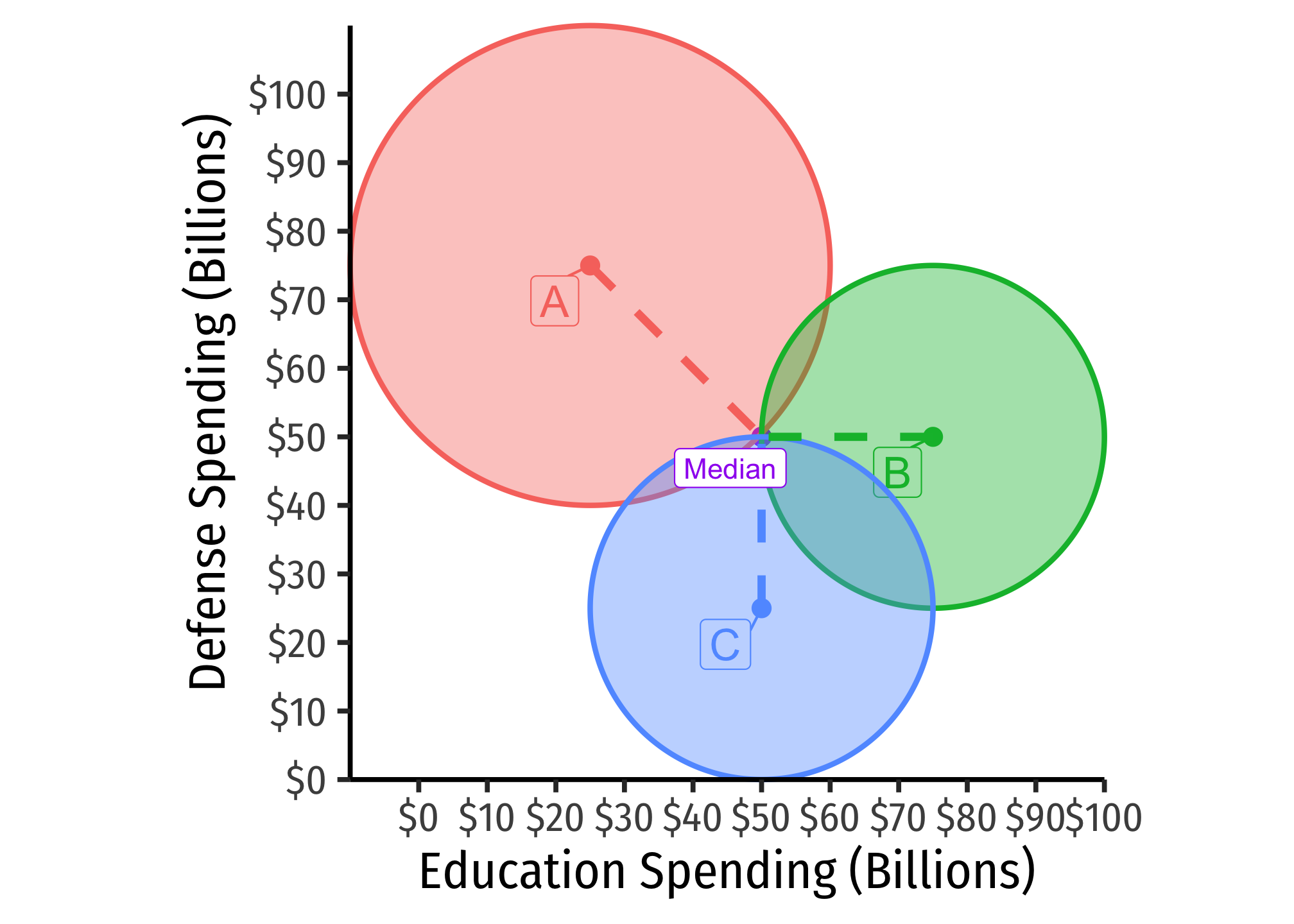 Note the “preferred-to sets” (the shaded circles) do not overlap at the median! The borders of the circles do, i.e. the indifference curve, but not the preferred-to sets!

Now, allow the voters to propose any platform they wish, to vote on in a pairwise vote. We begin with the median as a starting point: ($50B Education Spending, $50B Defense Spending).

Consider voter \(A\). She could propose something she prefers over the median, say point \(1\) at ($30, $70), but that is outside the other voters’ preferred-to sets (outside of their circles), so this would be worse for them, and they would vote against it. 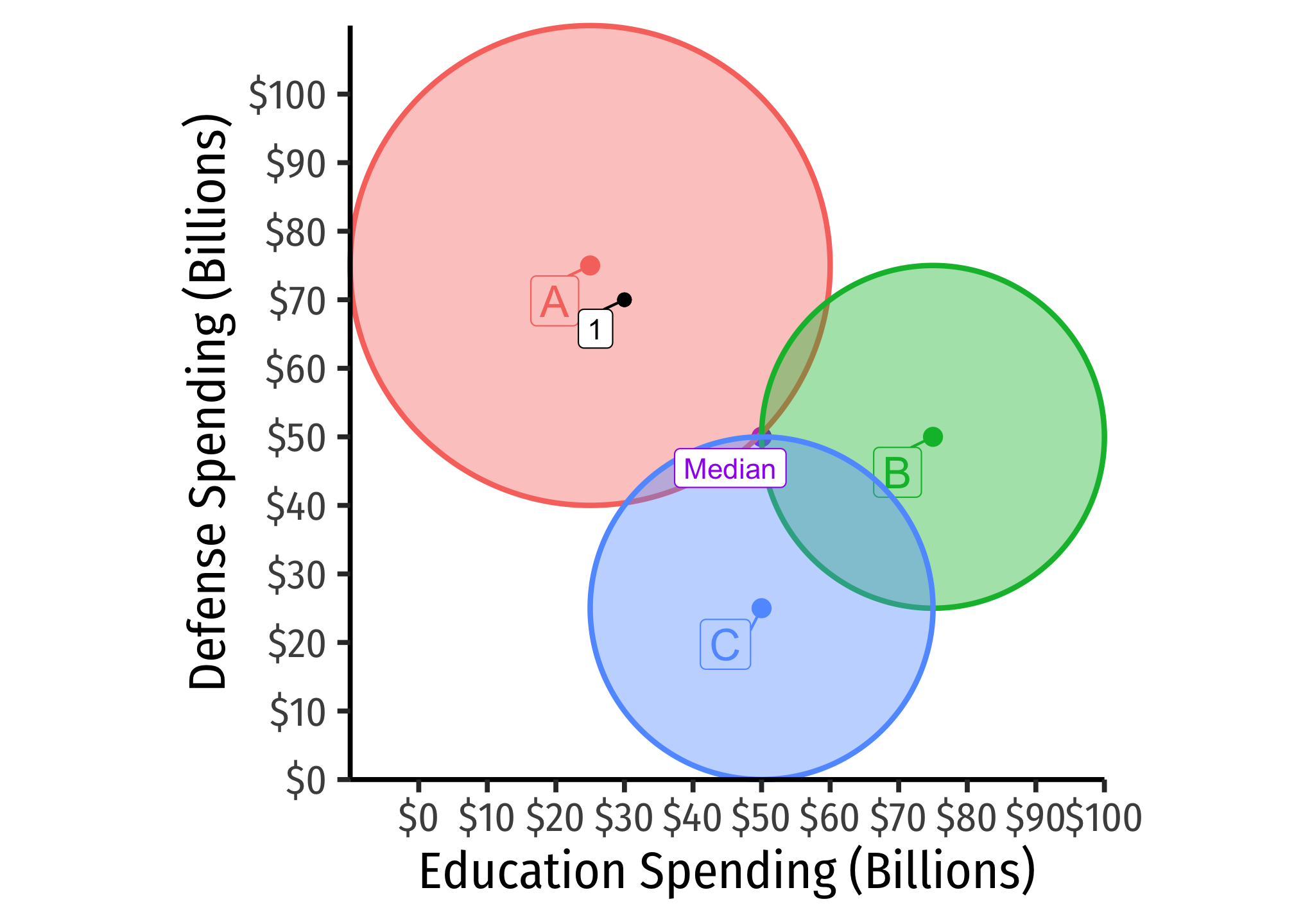 If \(A\) proposes something inside her and any other voter’s preferred-to set (inside the circle), she can get a majority to approve it over the median. Suppose she proposes platform \(D\): $35B education and $42.5 B defense. Then her and voter \(C\) will vote for this over the median, since it is inside both of their circles (and thus, preferred over the median), whereas \(B\) will vote against it, it being worse than the median. 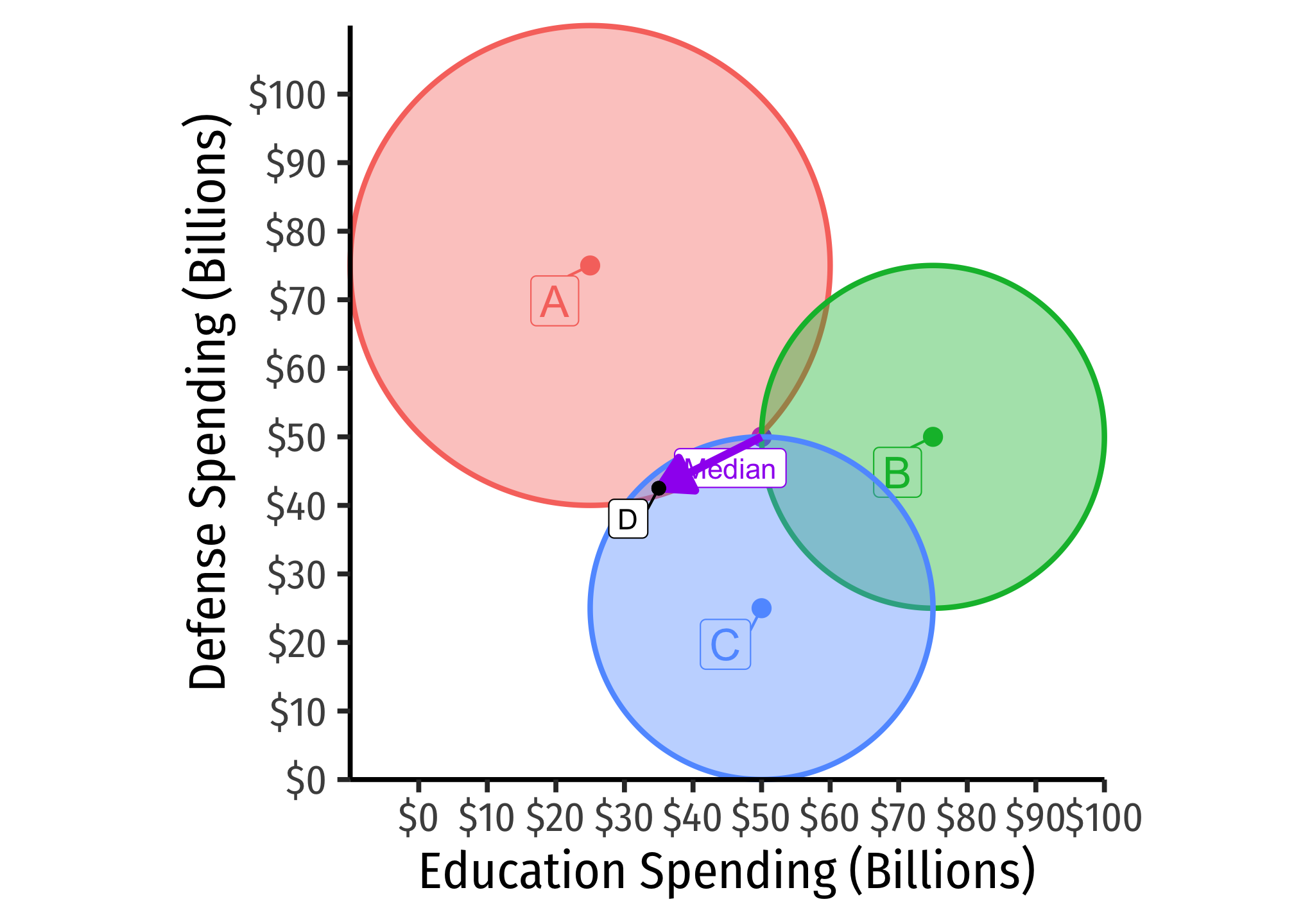 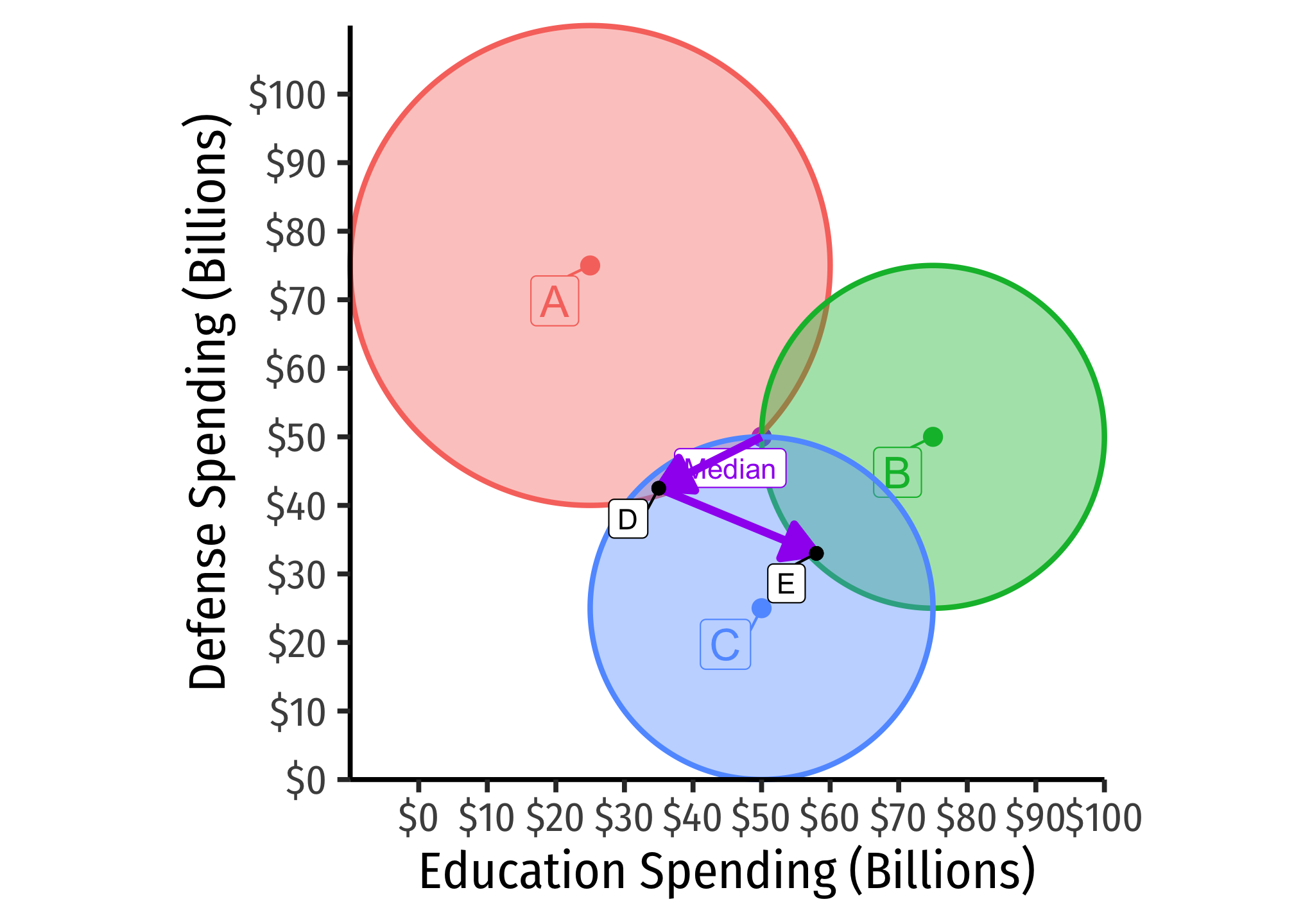 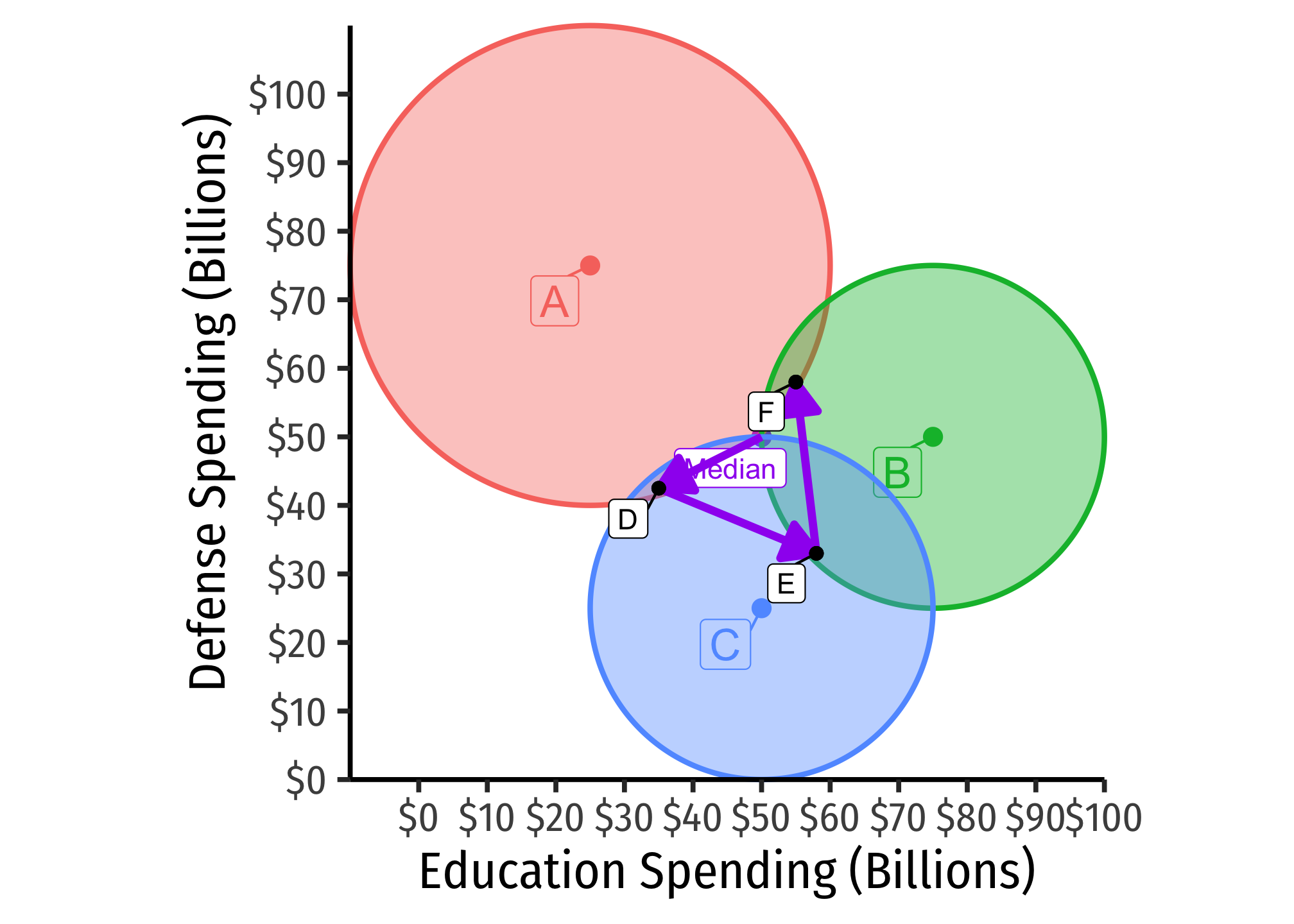 This is sometimes called the Chaos Theorem in social choice theory: in multi-dimensional policy space, even with single-peaked preferences2, there are no Condorcet winners, and thus a majority opposes each alternative. We can reach any point in this space with a carefully-constructed sequence of votes. Thus, again, there is no “will of the majority” and an agenda-setter can achieve any outcome they want.

The Median Voter Theorem worked in a single dimension with single-peaked preferences. The result we see here, in multiple issue space (and generalized by Arrow’s impossibility theorem), is that cycling is not easily solved: the median voter theorem fails when there are multiple issues.3